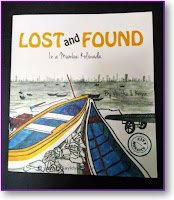 The stated aim of the series as being "intended to celebrate the city by examining, savouring, reflecting" begins with the intriguing title itself. There are layers to the story, implying a reference to the soul of the city being lost and found as well. The insertion of an article before the place name, a Mumbai Koliwada underlines that the story is about only one such Koliwada. Often, Koliwada is stereotypically referred to as a single, generic location where fisherfolk reside, when in actual fact there are many Koliwadas dotting the city, each with its own local culture.

The main protagonist, a young girl Meena who stays in Worli Koliwada with her parents, is waiting for her parents to leave – her father for fishing and her mother for the wharf after preparing the meal for the day. Why Meena is waiting to slip out of the house after they leave is what the story’s about. The only hint given is that she is making her way carefully with something cupped in her hands, which also tickles her palms. At the end instead of the expected final reveal, there is a map of her journey from her home to the Worli jetty. Usually, the story would be completed and then the map presented. Interesting touch to surprise the reader! 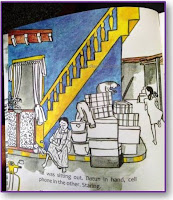 There is something very soothing about the restricted colour palette of grey, blue, brown and yellow by Kripa. There’s a lot of detailing, which bespeaks hours spent in the locality and its folks as evidenced in the interiors of the homes with the pedestal fan, cooking done directly over the gas cylinder (bit of a puzzle that), the crows on the overhead wires, the satellite dish sprouting out from a balcony, the comb tucked into a woman’s hair, the datun and phone held by a neighbour, the attempts at a green thumb popping up everywhere, a boy stringing flowers.

There’s also a cat Chamaki roaming around busy with her own 'finding' so to speak – foraging for food. It’s quite a delight to try and spot the cat in the illustrations. There is no attempt to force a parallel with Meena’s journey in that it doesn’t become tiresome where Chamaki seems to be following her everywhere. It’s also wonderful how Meena is portrayed; from a seated position to where she is in constant motion and then matching the text, halted by temptation due to the smells wafting from Usha Tai’s tea shop. Then she resumes her journey with her neatly bow tied ribbons loosened and plaited hair almost undone by the end of it. A superb detail.

Read it and Read it Again and Again The idea of the series, of giving the reader pause to think, spills over from the cover page to the text and the art work. The cover page of Lost and Found in a Mumbai Koliwada gives a hint to the story, but it’s still not a dead giveaway. The story itself is left open ended and the answers to the questions posed must be found by the reader. There is no compulsion to do so either, the imagination can take over and try and plot the journey thereon rather than ponder on what has gone. Just as with the story, there is also something rarely done in illustrations – where the picture is left unfinished, so there’s a part of Meena poised in flight stepping out of the frame. And Chamaki is almost hidden as it digs under the crate in the adjoining picture. A fish can be discerned on the cat’s body or is it a mirage?

There are also short paragraphs, factoids, but written in depth and not just as a smattering of information, which throw light on the terms used and provides historical context. For instance, what is a bundar and how they’re distinguished from one another and how closely the lingo of the Kolis has crept into the city’s place names. These factoids are separated by bullets that take the form of fish, but again, the series of fish are etched differently. See it for yourself. Read it and read it again for lines such as these by Vinitha: "The temple bells tolled. Out of habit she made the sign of….". You have to read it for yourself and see the illustration that goes with this text to understand the full import of what may seem to be just a passing statement. It says a lot about the city and what it could still be if only...There are also other signs of the decay nibbling away at the city fabric, such as what Meena must step on when her journey ends.

Priced at INR 199, Lost and Found in a Mumbai Koliwada is available as an e-book, but you won’t get an autographed copy online. It was wonderful to get a copy from Kahani Tree with written messages from Kripa and Vinitha. It’s meant as a children’s book, but while younger children may be able to follow the pictures and the simple text and get a sense of the story, the nuances and factoids may need to be explained by adults as vocabulary like ‘denizens’ may elude younger readers. The book could be insightful for adults, too, to look at the city from a different perspective as well to discover its unknown facets, such as the Worli Fort and the uniqueness it lends to its Koliwada as well as how it is being put to use today. Only wish girls had something to do there as well! Public spaces seem always to be open only to males! This book was written long before terms like Vocalforlocal became buzz words, and this book celebrates it in a beautiful way and is a timely reminder that business is not only about the big fish!

Lost and Found in a Mumbai Koliwada made it to the shortlist of the 2020 Neev Book Award in the Picture Book category.

Vinitha is a published author of 23 children’s books. She is also a content consultant, columnist and editor. She describes herself as a flaneur, a book devourer, a forever-thirsty story wanderer and a wannabe poet.

Kripa took up teaching and design after a fine art course from Sir JJ School of Art, Mumbai. Her passion is illustrating and collecting picture books. She also loves observing and documenting the city.

This book review has been written by Madhuri Kamat, author of Flying with Grandpa, Burial of The Dead - Mystery in a Mohalla, and Yudi Yudi Dharmasya: Mahabharat - Through the Eyes of Kunti.

Email ThisBlogThis!Share to TwitterShare to FacebookShare to Pinterest
Labels: Books