The Lady Who Made it Possible to Read this: Savitribai Phule and I - Book Review

Authored by Sangeeta Mulay and published by Panther’s Paw Publications, Savitribai Phule and I uses the device of letters to introduce the character of Savitribai Phule to readers and to the central protagonist Shabri. Savitribai Phule was the first female teacher who broke caste shackles to open schools for girls from all castes and communities. Reading about her struggle for social reforms helps Shabri, the 'I' in the title to step back from the brink of taking a precipitous step. 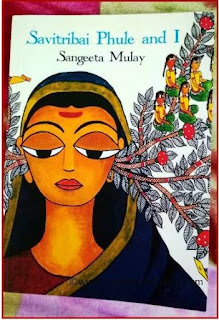 The story of Savitribai Phule and I details Shabri's struggle to find her footing as she faces discrimination in a city college because of her caste. It is something she has grown up with in the village school as well. But in the city, she becomes seen as a ‘reservation student’ who is not worthy of being in college at all. In the words of the author, she wrote the book "to offer a feminist perspective. How does a rural Dalit girl of the under-privileged class, dark skin and caste survive in a city all by herself with no one to mentor her? How does she handle the discrimination she has to face almost daily on account of her class, colour, accent, dress sense, English language skills and her ‘coolness quotient’ in a big city?"

As Shabri negotiates the hurdles put in her way from a callously indifferent and prejudiced Head of Department to her peers who openly deride all she does or does not do, her already low self-esteem takes a beating. So much so, that in one of the most moving sequences in the book, Shabri even tries to avoid having her parents from the village come and visit. And when they do, she tries as much as possible to keep their visit low-key. Her torment is beautifully etched in these lines, "How much I had worried about their visit and now it was almost over….I wished I had enjoyed looking forward to it more instead of constantly thinking of ways in which it could go wrong." This mindset unfortunately is also a survival tactic for Shabri as she is constantly tense anticipating the next humiliation in the offing. At a time when she is at her lowest ebb, she comes across a diary written by nine year old Savitribai Phule. The author almost like Shabri anticipates criticism of the vocabulary used not suiting a nine year old. Hence, she makes it clear through Shabri that the fictional diary most likely was written in retrospect by an adult Savitribai adopting the persona of her younger self. Fending off another likely criticism, the author pens a note at the end of the book apologising for the cultural appropriation in writing about caste despite being a non-Dalit.

As Shabri reads about how Savitribai received immense support from her husband Jyotiba who was also her first teacher, into Shabri’s life enters Bhuvan, who takes up her offer to act as her tutor. They forge a tentative friendship. But it doesn't last as the jibes of peers that she can't manage without upper caste support get to her. She feels she must prove she can manage independently and despite their mutual feelings for each other, she edges away from Bhuvan. How Shabri goes on to chart her own course and makes the story of Savitribai Phule more widely known forms the rest of the story.

Why It Should Be Read

Savitribai Phule and I is written in a simple style and also provides one of the few and perhaps the only fictional takes that involve one of India’s foremost social reformers. The epistolatory style fuses well with the story and the passages on Savitribai Phule do not interrupt its flow. The subject of caste discrimination is also brought out in its full ramifications going beyond the outward to the impact it has on mental and emotional well-being. It will hopefully serve as a wake-up call for those of us who are more privileged. It also offers pointers on how social movements can be initiated and built and can be a primer for those not in the know of social action. Shabri is also portrayed realistically wherein she constantly questions herself and at one point beset with fear withdraws completely from the movement she started. Through Shabri, it is shown how those who seek to strike a new path are often also physically intimidated and the emotional toll it can take. But there is also a positive spin in that Shabri without seeking advice or waiting for help, on her own accord goes to file a complaint at the police station not once, but twice and it is taken seriously. Shabri also notes the singling out of caste in casual conversations and it reflects current times where many watch with growing unease the normalisation of such thinking and action. The book is a timely reminder to speak up against it.

The attempt to pare down the story to only Shabri's viewpoint leads to a lot of details not brought out fully. Despite the mirroring of Savitribai Phule’s story in showing Bhuvan as a kind of counterpart of Jyotiba Phule, Shabri is not shown as having any female character etched out among her support group. For instance, Savitribai was assisted in teaching by the first Muslim female teacher in India, Fatima Sheikh who with her brother provided Savitribai and her husband shelter when they were thrown out by Jyotiba’s father. It is at their home that one of the schools was also opened. So, it’s surprising that despite this history, even later, another male, Raj, is shown as encouraging Shabri and the others in the group, including females, though equally encouraging are never brought out in detail.

It is also disappointing to see that the supporting females in the waada where Shabri stays are often only shown plying her with tea to calm her down. There are no shared moments, which is odd. Odder still is the lack of their action. For instance, when filing a third complaint at the police station, it's done by one of the boys from the college who are called in by the girls. Given the avowed feminist stance of the author and the feminist slant of the book, such moments are particularly grating. Although the book is intended to change the narrative and make upper castes reflect on their privileges, within the book, Shabri's peers not being fully detailed are also not shown changing their stance in any fundamental way. There is only a fleeting reference to some students supporting Shabri. It is only in the larger societal context of another Dalit student's suicide that the movement for casting aside caste receives a fillip rather than Shabri's actions.

For some inexplicable reason, barring Shabri, Raj and Bhuvan, no one else gets a name. Not even the Head of Department who is addressed as HOD. This may be a device to show that often being of an underprivileged caste and class renders personhood invisible. Shabri may be reversing the treatment she gets on to the world around her by not naming anybody. But in the absence of any other fully etched out character outside of Shabri's parents, the rest remain more of a chorus chiming in whenever needed.

Although there is mention of celebrating Savitribai Phule's birthday as Education Day, the fact that it is celebrated by Dalits and Bahujans in India as 'Teacher’s Day' deserved mention in the fact sheet at the end of the book.

The art work by Malvika Raj is simply stupendous in her compelling rendering of Savitribai Phule. And as if this were not enough, there's an outstanding back cover as well. Often back covers content themselves with minimal art and prominence given to information on the book. But Malvika Raj has a beautiful Madhubani art collage of women at work and study and its bright colours really lift the spirits.

The same theme is continued inside where for a change, a sari clad lady is shown stretched out in front of her laptop.  Each page number is accompanied by the image of women attired in graduation gowns and hats. Both are black and white images, but were part of the original colour collage. Since the original image was too large to entirely fit the smaller size of the book, it’s wonderful how they've been used in this quaint way!

There’s also a pale shade of a semi-arc on every page. Not sure what that symbolises, but it’s a change from the usual. So, go buy a hard copy although it’s also available as an e-book.

Information on the Book

Savitribai Phule and I is a compact book priced at INR 299. You can purchase your copy from indie book stores like FunkyRainbow and Kahani Tree and online as well.

Malvika Raj is a Dalit Madhubani artist who subverts the traditional art form by not showcasing Hindu narratives. A National Institute of Fashion Design graduate, she is a fashion designer, too. Her Madhubani painting of Babasaheb Ambedkar is displayed at the University of Edinburgh. You can read more about her and see the original full cover.

Even as this review of Savitribai Phule and I was being written, two events took place. A serial based on the life and times of Savitribai and Jyotiba Phule was pulled from screening on television after low ratings. It made a director write a post wondering aloud why it was that, despite a stellar cast and quality writing, the serial failed to find an audience. In another announcement, Maharashtra’s Education Minister for schools declared that Savitribai Phule’s birth anniversary would be celebrated as Women’s Education Day and awards instituted in her name.

This book review has been written by Madhuri Kamat, author of Flying with Grandpa, Burial of The Dead - Mystery in a Mohalla, and Yudi Yudi Dharmasya:Mahabharat - Through the Eyes of Kunti.

Popular posts from this blog

Jan Kalyan Shiksha Samittee, New Delhi is offering f ree Coaching for SC/OBC Students for preparing for the UPSC Civil Services Exam. The Govt. approved coaching for the year 2021-22 is sponsored by the Ministry of Social Justice and Empowerment, Government of India.
Read more

The India First Foundation School (IFFS) is an ICSE residential school for boys & girls. It is located in Karjat, Maharashtra. Classes for ICSE are from Std.I to Std. X. Science and Commerce streams are offered at the Std.XI level. The school also plans to offer Cambridge A level exams in the future. Extra-curricular activities include two annual field trips.
Read more